All is quiet this Monday morning, and instead of tackling my very long to-do list right away, I will let you in on a few recent happenings in and around the Schraefel farm!

On April 13 (which was Bud’s birthday), Adam and Derek and I traveled to not-so-sunny Alberta to visit the Lacombe Schraefels and take in Amaris’ confirmation at St. Mary’s in Red Deer. We of course came across some typical Alberta drivers: 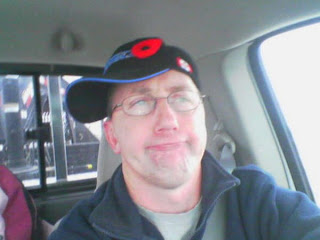 Unfortunately, this one was the head of the family we were visiting!

We had a great couple of days catching up with Mark and Lisa and their great kids. Nicolas came to the confirmation, and we got the see Nathan the next day at Mark’s. 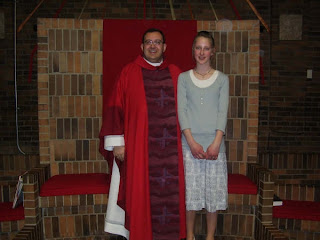 Amaris with Father Paul. Mark introduced us to Father Paul, and this intelligent man agreed that we came from God’s country.

Derek’s not looking too thrilled, possibly because there were 160 confirmands, which took some time, and Derek is not all that pumped about being in church at the best of times, especially on a Friday evening! 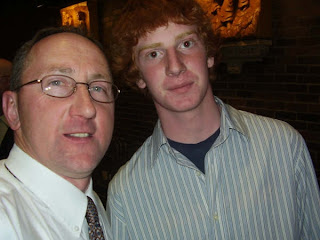 Mark was too tight to spring for a photographer, so took all the pictures of himself, himself. 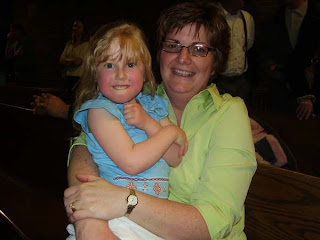 Avalon finally warmed up to me, and then stuck like glue for the rest of the evening. It was great!

Clem was one of 25 people hand-picked by the president of the Saskatchewan Hockey Association to attend the first-ever hockey summit, held in Regina. It was also on the 13th, so we went in separate directions that weekend. Clem said it was a great meeting, and he learned lots. For those of you with Luseland connections, Clayton Muench was also there, representing Martensville.

Stephen decided to stay in Kerrobert that weekend for cousin Dylan’s birthday party. As a present, Stephen taught Dylan how to sneak out of one’s bedroom and roam small-town Saskatchewan until the wee hours. Stephen is now forgetting what his dirtbike looks like.

Adam and Stephen took the Hunter Safety course offered by Sask Wildlife (the federation, not the actual wildlife). They would not have taken it if their mother had realized it was every evening for two weeks. However, we managed and they both passed with flying colors. Yeah, my kids know how to shoot – every mother’s dream.

Clem has started seeding. We have finally had some warm, spring-like weather, and it’s wonderful. It does mean a lot more work around here, but the boys are getting to be a big help. Derek especially likes to be outside. Besides the fresh air, it means he may be called upon to drive something, which he loves doing! He will often give Clem a lift to and from the field. Clem has been enjoying his new toy – the tractor. We even have a hard time getting him to come in and eat!

I am happily planning a trip to Scotland in July. Lisa will meet me there, and we will explore the land of our ancestors for two weeks. I can hardly wait! I’m just not sure two weeks will be enough time to do everything I’d like to do, but I am sure Clem couldn’t handle more than 14 days with “the boys”. So it will have to do, and I may just have to go back again some time!

For any of you who heard that we lost our new video camera, relax. We found it! Someone cleaned up the studio (Clem? Adam?) and put it in a very safe place. Now Adam has another gig videotaping a wedding. Cousin Don Snell is getting married May 26. Tracey’s shower was on Saturday. It was quite nice, as showers go, with entertainment provided by Margie, Bobbi, and Jaycee. The stagette that night was a bit rowdier. Suffice it to say it involved huge geese, “Strip and Go Nakeds”, and Aunt Lorraine’s freezer.

Well, that’s a wrap for now. Thanks for stopping by!

P.S. Carl, our toilet paper is white. At least to start with.