I went to a funeral today.  A four hour drive, about three hours for the service and visiting, then the four hours home again.  A long day.  But I’m so very glad I went.  We were there to celebrate the 96-year-long life of my dad’s uncle, my grandpa’s brother, and the last of that generation on both sides of our family.  Uncle Eddie and Aunt Mary lived about four miles from where I grew up.  He and my grandpa farmed together, then he and my dad farmed together, and then his son and my dad farmed together.  That’s a lot of farming, and a lot of togetherness.  He was a fixture in my younger years, especially after my grandpa died when I was 5.  They were sort of our surrogate grandparents.  I haven’t seen him since he and Aunt Mary moved into a nursing home in Alberta a few years ago, but I was privileged to be able to attend his funeral.  And it was so good to see his sons and their families.  So good.  His oldest grandchildren, in particular, were close to my age and we spent a lot of time together when we were young.  I mean, the five of us bathed together, for heaven’s sake!  Kenny was the one who told me there was no Santa Claus.  (Thanks, Ken!)  We made forts in trees and played cowboys and Indians.  We had sleepovers at each others’ places when our dads were singing in nightclubs.  We’ve mostly lost touch, except for a family reunion 23 years ago and the odd photo on Facebook.  But there is something so comfortable about reuniting with cousins/friends that you played with as a child.  And I think, if their warm hugs mean anything, that they felt the same.  In reality, I probably went just for the chance to see them again.

So thanks, Uncle Eddie, for all the teasing you did over the years, for sparking in me an interest in genealogy, and for the gift of your family.  Rest in peace. 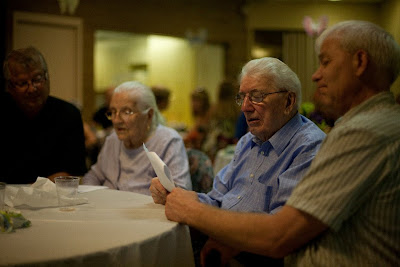 (PS: I stole this photo from his great-granddaughter, who wrote a very moving tribute to him at http://candacehuck.wordpress.com/2012/06/14/the-huck-legacy/#comment-92.  Check it out!

Thanks for stopping in!
Chandra

One thought on “A good long day.”