1.  Stephen is arriving home today from his two-week stint up north.  He’s an operator in an oilfield near Fort Nelson, but that is absolutely all I know about his work.  That, and his quad doesn’t have power steering.  Perhaps he’ll be more forthcoming in person than he was while texting.   I will ply him with food – we are planning a belated birthday supper for him this week.  He celebrated his 18th birthday in a dry camp.  Oh, the irony.

2.  We are getting two Jr. B hockey billets.  I’ve been cleaning.

3.  Clem and I attended my aunt’s funeral last week.  It was a beautiful service.  Clem sang a very moving hymn, and later had little old ladies coming up to book him for their funerals.  He could be a busy guy!  It was so good to reconnect with most of my paternal relatives, even if it was such a sad occasion.  More good memories were created.

4.  I traveled with a friend to the big lights of Saskatoon to meet some of the others with whom we traveled to Africa.  Norm was bringing back the boy he had been sponsoring at Ussongo for a few years.  Kisamo, 18, has a two-year visa, and will go to school in Humboldt and possibly university if he can qualify.   It was great to see some of the ‘gang’, and Norm was touched that we would drive in to meet them. 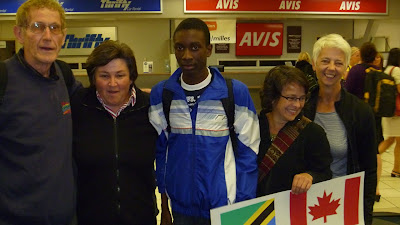 5.  Harvest has been interrupted for a couple of days due to the weather.  The machinery has been holding up, thank goodness, and the flax is almost all swathed.  I finally got out to take a few photos; unfortunately, it was when I was supposed to be at choir practice.  Oops.
Here’s Derek picking up some lentil swaths. 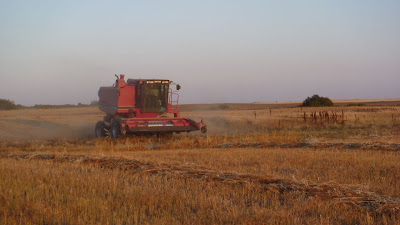 And posing for the camera.  Mr Hollywood with his fancy Oakleys! 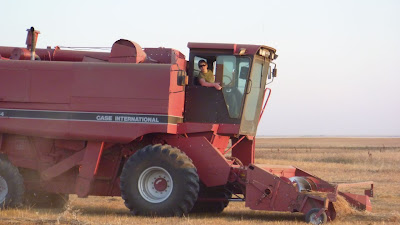 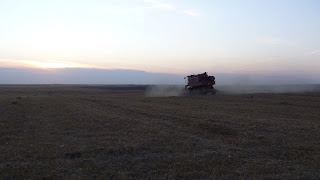 And here’s Adam straight-cutting wheat (which this year is hard to find in the wild oats!!) 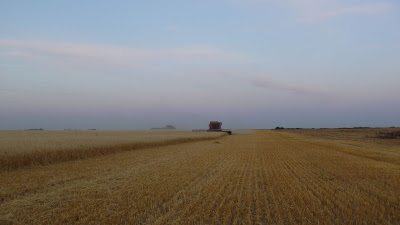 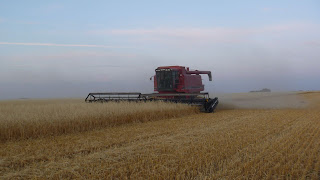 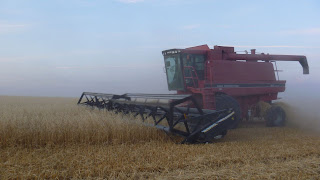 Such a pretty sky – even a few geese in the distance! 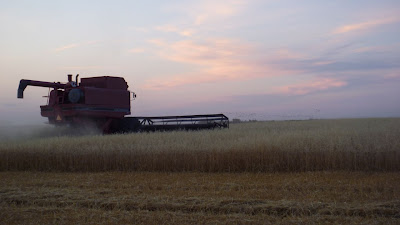 6.  My cana lily bloomed before it froze this year, something of a rarity here.  Such a beautiful flower. 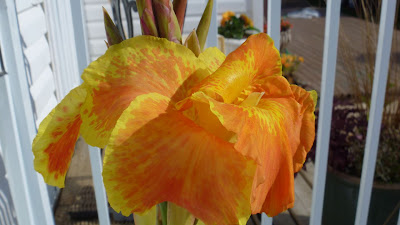 7.  Derek had to get new skates – again.  His shoe size is the same as his age – 13 – and I see no light at the end of the tunnel.  I have heard horror stories from other parents about special-ordering skates.  I don’t even want to think about it.
And that’s about it.  Thanks for checking in!
Chandra