I’ve got the giggles.  I just watched my favorite middle child leave for school.  He walked out the door, across the yard, and got into his ’75 Cadillac Coupe de Ville.  I mean, really, how many mothers can say that?  He didn’t leave right away, though.  The car door opened again, and pretty soon I saw a big red hockey bag land with a thump on the ground.  I’m guessing the smell in that car was NOT nice.  Actually, now that I think about it, I don’t have to guess at all, having had said bag in my van overnight too often at tournaments and such.   Too funny.

He’s off to Central Butte tomorrow for the football Provincial quarter-finals.   In a small twist, the coach of Central Butte’s undefeated team is a native of God’s Country (lucky man!)  Should be an interesting afternoon, and I hope someone sends me up-date texts, as I have to work in the morning and go to Derek’s hockey tournament here in town.  Derek’s pretty pumped about being chosen assistant captain for the team. I’m not sure why, since it seems every second-year player is an assistant. But whatever.  He’s happy, and that’s all that matters to me!

The Midgets are up and running after a somewhat shaky start.  Suffice it to say politics and parents almost got in the way of kids having fun again.  Not sure why this has to happen every year.  I guess it’s like Clem says – there’s always politics when more than one person is involved!

We had exceptional potato and carrot crops this year, and they are finally safely in from the garden.  The carrots are sweet, sweet, sweet.  And huge!  I’m sure I left half of them out there because they split with all the moisture or were cut off by Clem’s magic digging “claw.  It works way better for potatoes.  And we are still eating tomatoes from the garden.  I canned and froze lots of them, but we sure do enjoy the fresh ones.  I am dreading the day I have to buy those cardboard ones from the store again!

I stopped to see my aunt yesterday, the one who had the MS “liberation therapy” in Bulgaria.  They surprised everyone and came home early.  She is doing great – walking without a cane, getting up out of her chair way better, and she just looks like she has more energy, even with the jet lag.  I’m so happy for her – what a wonderful outcome!  I tried my best to steal some of the video of her walking that was on Facebook and put it here, but I couldn’t figure out how to do that!  In fact, I can’t seem to put any video on this blog.  Velvis, I may need a tutorial!

So no video, but here are some pictures (I know, you’re shocked!)  The first is Derek (big guy in black in middle of photo) picking on one of the little guys! 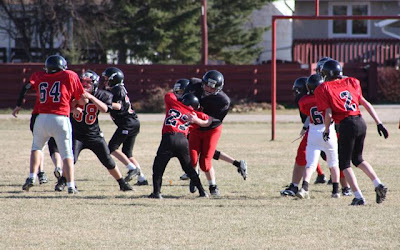 The rest are the last pictures I will probably take of Stephen playing football.  Rather sad, as he really loves the game.  Here he literally launched big #3.  I wish I had the shot of the poor guy on his butt about a second later! 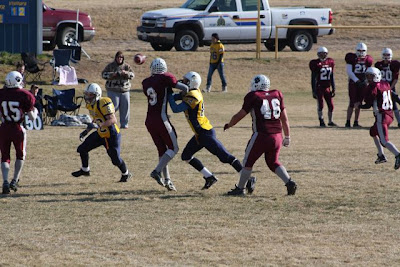 Not quite fast enough here, although they didn’t score, if I remember correctly. 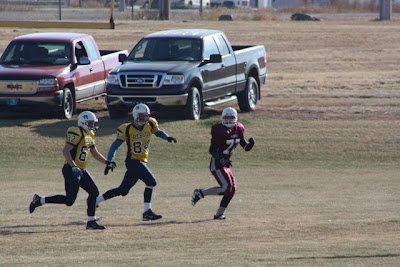 Love this shot – Stephen and Mike with their fancy moves, blocking a kick. 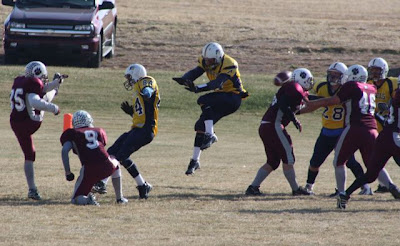 This poor little receiver (quarterback?) must have flown about six feet in the air.  Stephen grabbed him and swung him out of bounds.  Then I think he landed right on him.  Nice guy! 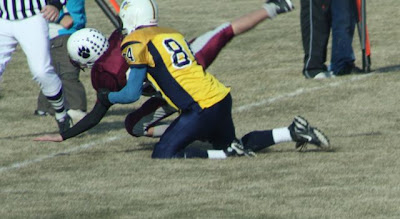 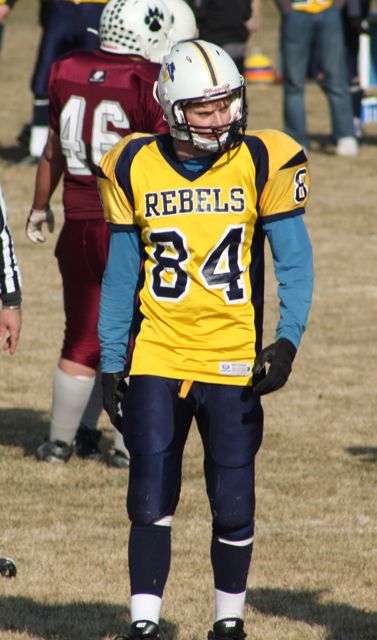 So that’s about it for now.  I’m frantically trying to get everything caught up and delegated before heading south in three weeks.  Clem is cleaning up machinery and putting it away for the winter.  We’ve had a couple of trucks come already for grain, which is nice as we need the CASH!  These once-a-year paycheques are for the birds!

Thanks for checking in!
Chandra

PS to Anonymous:  I don’t think I said anything negative about anyone here, so you won’t have to anonymously text anyone to have a look!