Harvest is over for another year.  And what a long, long, drawn-out affair it was.  What with rain, frost, break-downs, and cool weather,  I wasn’t sure we’d ever finish.  But we did.  Yesterday afternoon, with my wonderful sister-in-law and super-sweet niece here as witnesses.  And it was a gorgeous fall day.  Close to perfect, in fact.  After we returned from the rummage sale, where Copper found a beautiful dancing dress (it’s really a flouncy slip kind of thing, but we didn’t let on) and a snowball (styrofoam craft ball) and impressed the ladies there with her math skills, Stephen gave our visitors a ride on the combine. 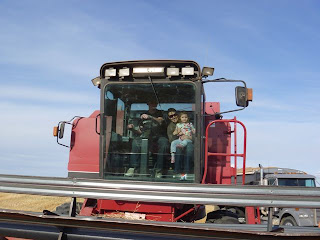 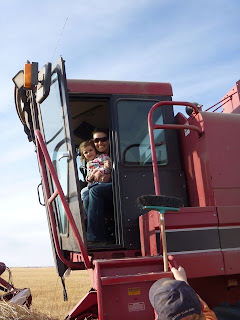 Copper didn’t look too thrilled to start with (apparently she’s seen the evil combine chase in the movie “Cars”!)  but she came around after cousin Stephen gave them a midway-worthy ride around the field.
Here’s Clem with his slightly over-loaded truck (she said with her tongue in her cheek): 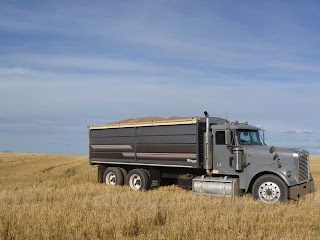 and a very non-chalant Derek who got to follow in the Ford. 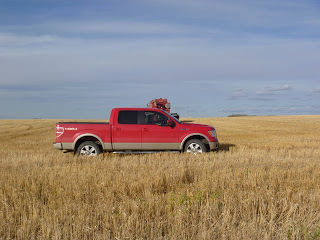 My brother, Mark, joined us for a celebration supper.  It was a great evening of visiting and enjoying having a little one around again.   Good times.
Here are a few of my favorite shots from harvest 2010… 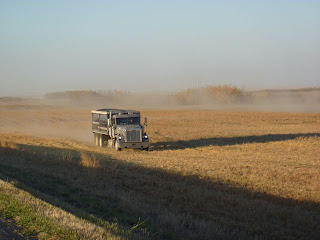 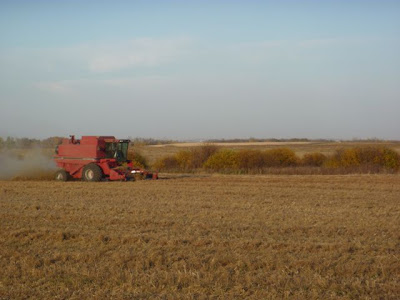 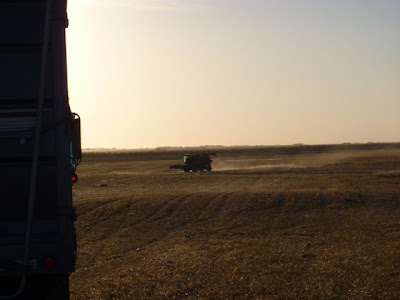 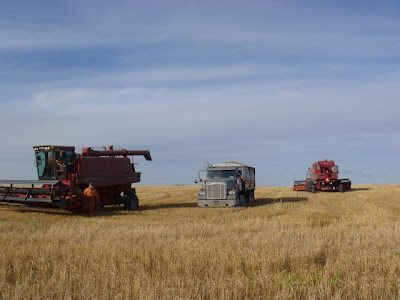 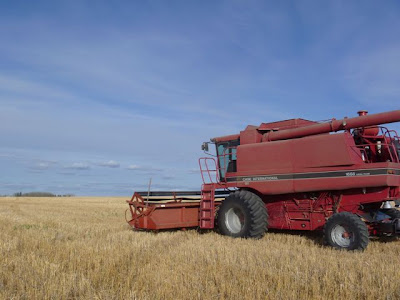 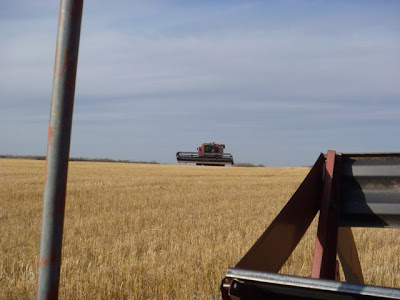 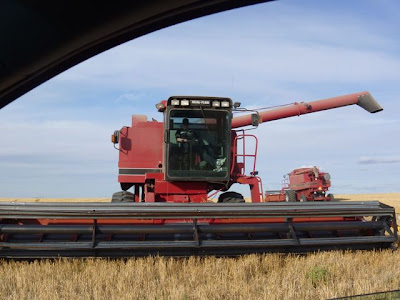 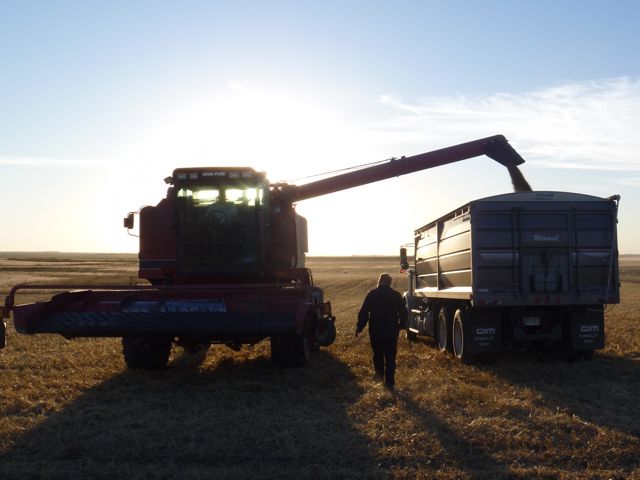 I really must commend Clem for his excellent attitude again this fall.  He never really gets too excited or worked-up, no matter what happens (well, there was that one day when I phoned him at a not-very-good time, but we’ll let that one go),  and I love him for it.  As he says, we can’t do anything about the weather, so why get angry.  What a guy!
Football is winding up.  Derek plays his last two games this afternoon.  I think he will miss it, as he had so much fun.  But hockey officially starts on Tuesday, so he won’t have much time to mourn.
The Rebels lost to Plenty again.  They stayed neck-in-neck for the first part, but, I’m told by at least five dads, they were out-coached in the fourth quarter.  I didn’t go, so no pictures.  Oh well, it’s just a game.  Maybe I should tell that to Stephen’s knee, which is twice as big as it should be.   May be going back for physio!
The Midgets are going through some organizational issues right now, but I’m sure everything will get worked out, as it does every year.  It’s Stephen’s last Midget year, and I hope they do well and have as much fun as the last two years!
My aunt leaves today for Sophia, Bulgaria, to hopefully have the “liberation treatment” for MS.  We’re praying for you, Auntie!  What an adventure!
Now that harvest is over, I am starting to mentally pack my suitcase for our trip to Chile.  One month!!
Better run.  My chauffeur hat is calling…
Thanks for stopping by!
Chandra