Yes, we got back from Weyburn!  After the obligatory stop at Dog River (aka Rouleau, SK) for a Corner Gas shot… 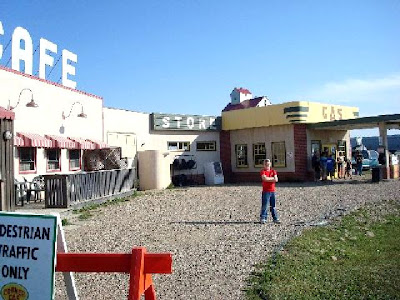 …we drove late into the night in order to rest in our own beds after a week of not-so-Perfect-Inn accommodation.

Weyburn is a very nice little city.  It has all the amenities yet maintains it’s small-town rural feel.  For instance, we had to make way for a large new combine traveling by the Scotiabank building, and one of the dads drove his tandem grain truck to the rink for the nightly scrimmage.   Ah, Saskatchewan.

The weather was pure Saskatchewan, as well.  It was extremely hot during the day (38 degrees one day) which brought on menacing clouds in the late afternoon.  Some days I wasn’t sure what would happen. 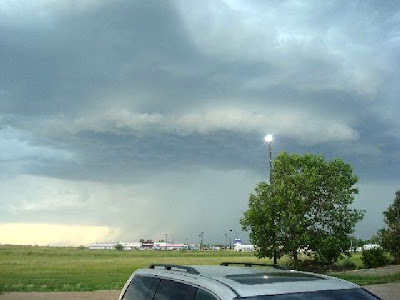 All we got was wind and a bit of rain, though.  Made us feel right at home.

Derek and I took some time for a bit of touring.  First things first, we searched out the water tower. 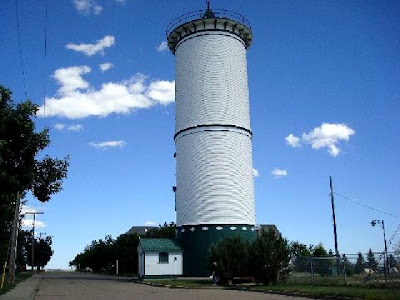 Then it was off to the outdoor Heritage Museum, where someone who looked like she was going to cut grass became our very knowledgeable tour guide.  Derek really got into it, asking many questions (I know, surprising, eh?).  He was especially intrigued by one house where an infant had died under mysterious circumstances – most of which were pure legend, I’m sure. 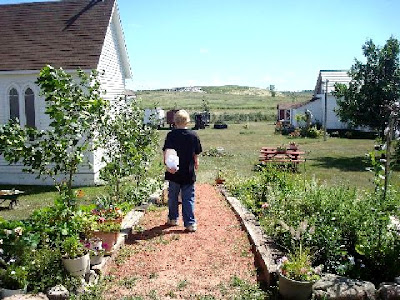 The gardens here were amazing, and all done by a volunteer with donated plants.  The museum is located at the highest point in Weyburn, and was picture perfect, except for the view of the town dump.  Shelterbelts, people, shelterbelts.

Our last evening in town was lots of fun.  We imposed on my cousin Michael and his family and descended on their home with take-out food.  Michael’s sister, Bonnie, and her kids, Adam and Kaycee, joined us as well.  It was Adam’s 21st birthday, and ice cream cake was enjoyed by all at the end of a very hot day.  Derek and Sheldon, Mike’s boy, (who is a year and a day younger than Derek!)  had a great time together, and snuck in an ice cream treat at the rink prior to the birthday cake! 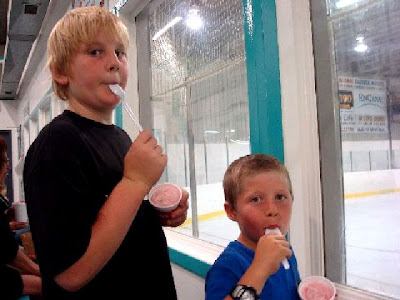 Adam and Mike’s daughter, Shelby, posed for their pesky cousin. 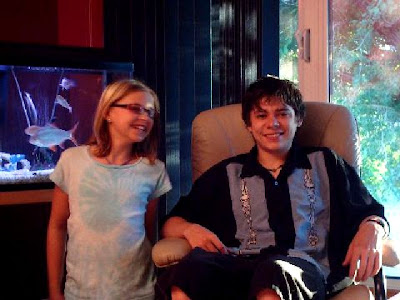 The boys had great fun at their camps.  I think they enjoy the camaraderie with the other players even more than the hockey, but that’s good, too.  Can you guess which one is Derek?  (Hint: look for tall and blue!) 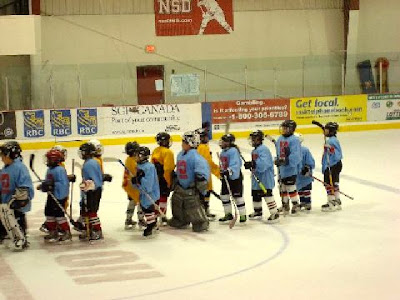 Derek snapped a good shot of Stephen on the ice (green socks and, again, tall). 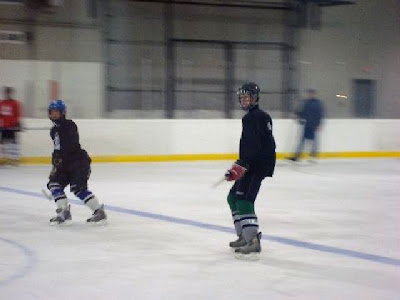 All in all, it was a good week.  I got in lots of hockey and lots of family time.  But the peas and beans were calling in the garden, so it was right back to the grindstone for me.  I guess it keeps me out of trouble!

Thanks again for stopping by!