My, how the time has flown, and how many events have transpired. I am currently sitting in a hotel in lovely Weyburn, Saskatchewan (“the Opportunity City”, according to the tourism booklet in the room), home of Tommy Douglas, W.O.Mitchell, and a strangely familiar water tower (although unlike Kerrobert’s, this one is no longer in use.) I haven’t taken many pictures yet, but hope to do so on Friday when Derek is with me. He is attending hockey camp at Notre Dame College in Wilcox. I drove there last night to watch one of his games, and he hurt his shoulder on his first shift on the ice. But I did learn that he is having a ball and meeting lots of new friends. He is done on Thursday, and my wonderful cousin, Bonnie, will pick him up and bring him here to Weyburn. Her brother and his family live here, and Bonnie and her daughter want to see Stephen play at his hockey camp. This midget prep camp is very intensive. They start at 9:15 in the morning and except for a few half-hour breaks, go steady until 10:00 at night. Needless to say, he has no trouble getting to sleep here at the Perfect Inn (which Stephen wryly noted would probably never live up to its name!) Derek and I will do a little sight-seeing on Friday until Stephen is done, and then we will head home.

We received news that my baby brother, Rob, landed his dream job with Cameco in Saskatoon. We look forward to having them closer. I suggested they find a house with a suite in it in order to perhaps keep a nephew or two in the near future. Haven’t heard back on that yet….

Also in the Schraefel news is sweet little Copper’s first birthday. Apparently they had a party at Grandpa and Grandma’s in Lethbridge, but I don’t have any details on that. Auntie Lisa put up a great picture of Copper on her blog, if you are interested. (www.lisahuck.blogspot.com)

Derek, Mom, and I took a little trip to Thunder Bay. We got to see lots of relatives, and it was Derek’s first commercial airplane trip. He was some excited. Bouncing may actually be a better word. And I think he talks even more when he is bouncing. It was not a peaceful little getaway. We had a four-hour layover in Winnipeg, so we went to visit Clem’s aunt Louise. She is such a dear, and had a nice little snack and tea ready for us. She and Derek got along famously. 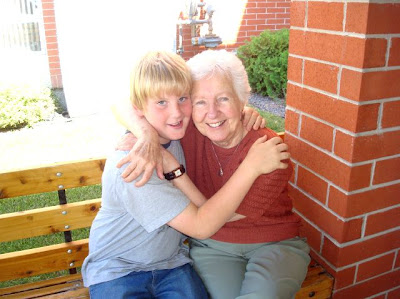 When we arrived at Thunder Bay, mom’s cousin, Joanne, and her husband, Bill, picked us up and drove us to Manitouwadge (three and a half hours along Lake Superior and another half an hour north – Derek was thrilled!) to see Mom’s uncle Joe and Barbara Schan, both of whom are in a care home there. Their daughter, Debbie, lives there as well, and she and her husband, Dave, were kind enough to keep us overnight. We had a really good visit, and were able to spend quite a bit of time with Uncle Joe and Aunt Barbara. Here are Mom and her cousins Debbie and Joanne with their parents. 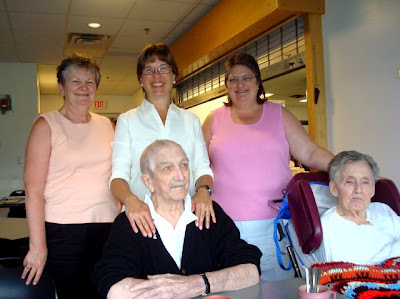 Aunt Barbara can no longer speak, but she seemed happy to see Mom. 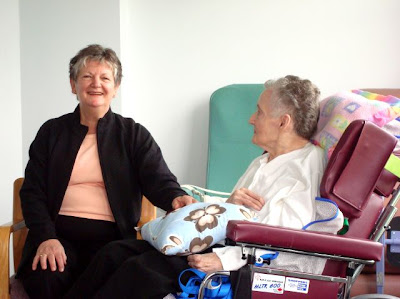 Uncle Joe is the last surviving sibling of Grandpa Schan, and he reminds me so much of Grandpa. He is much more emotional, though, and cries when he is happy as well as when he is sad! I just love that about him! 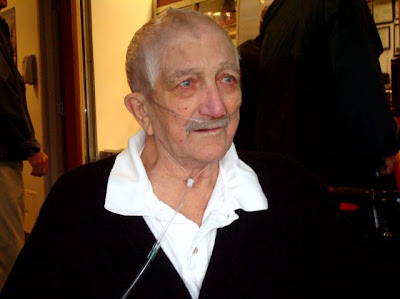 Derek was quite taken with him, and propped up a couple of little Saskatchewan flags in his walker. Uncle Joe is starting to forget things a bit, but he always knew Derek, and he still has a great sense of humor. Just after I snapped this picture of him and Derek, he asked me if I got a good shot of his pretty blue eyes 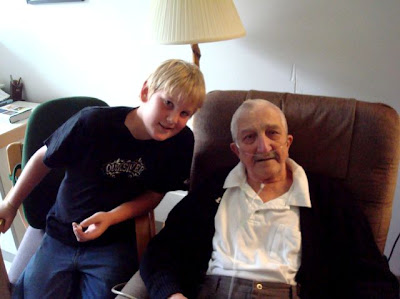 When we got back to Thunder Bay we stayed with another cousin of Mom’s, Betty Jean and Jim Start. They were very gracious hosts, and took us sight-seeing and hosted a family gathering so we could meet more relatives! Derek was excited to see the Terry Fox monument that his dad had seen many years ago. 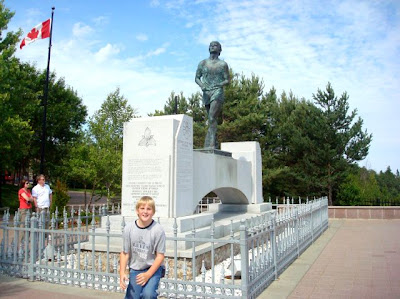 And of course we saw the Sleeping Giant, seen here in the background. 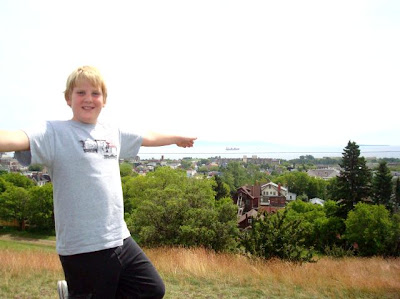 Derek and I also managed to get in a visit with another Clem’s aunts, Anne, who lives in Thunder Bay with her son Jim. She is 92 and still in her own home. 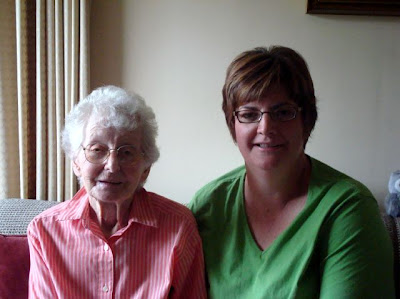 The potluck lunch at Betty Jean’s was great, and we were able to meet and reminisce with lots of relatives. Even Mom’s Aunt Corrine came. 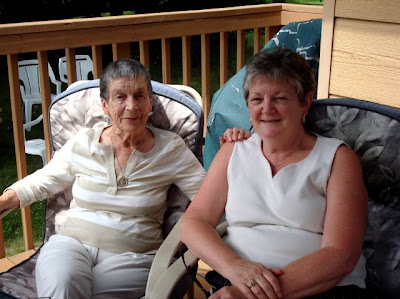 This is Betty Jean with her youngest daughter, Linda, and her son, David’s, children. 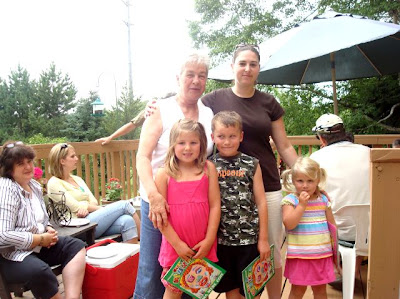 Here’s a shot of all the cousins that could make it that day. 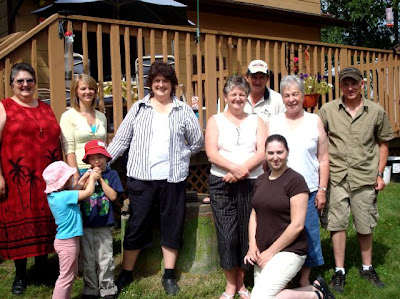 It was a great trip, but it was nice to get home. Clem and the boys had continued working on the deck, and my garden was bursting with work for me!

On a sadder note, we received word that the son of a former CP colleague of Clem’s was injured while serving in Afghanistan. He lost both of his legs below the knee. There is an article about him here: http://www.army.forces.gc.ca/lfwa/TF108/feature_fuchko_recovery.htm

Well, I’m off to the rink again for a bit to watch Stephen, grateful that he is healthy and able to skate. Thanks for stopping by, and check in later for more Weyburn news!

One thought on “Greetings from Weyburn”