…and I am going to have one smoo-ooth ride, my friends. I have been composing posts in my head, always intending to record my witty musings in a timely fashion, but I guess I will now just lump some words and pictures together in what is turning out to be a monthly update!

The first potential post was about our spur-of-the-moment whirlwind trip to Lethbridge on the Father’s Day weekend. We had a great time, blissfully unaware that a wheel bearing on the van was ready to seize at any moment. (It has since been fixed.) Jason and Terri had also decided to visit, so it was a houseful, and I’m sure Mom and Dad were glad that we and our three big boys could only stay a short while. I think they would have kept precious Copper longer, though, as she was certainly the center of attention for all involved. 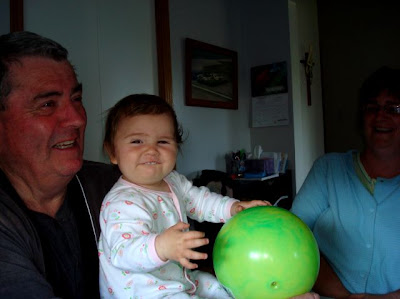 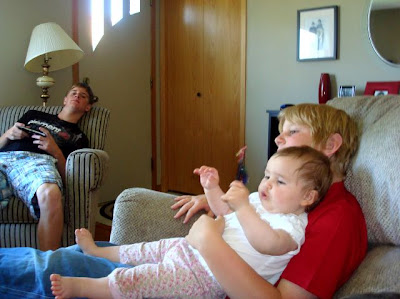 She like hanging out with her cousins, especially Derek! She apparently doesn’t mind being mauled somewhat! 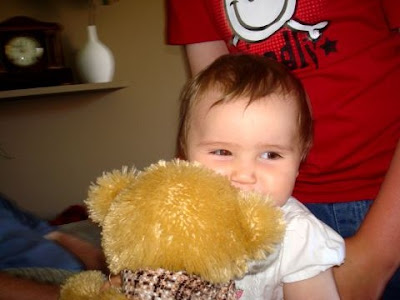 Her morning was spent sitting on the table, hamming it up for everyone, and Grandpa was by far the most impressed with her entertaining abilities. 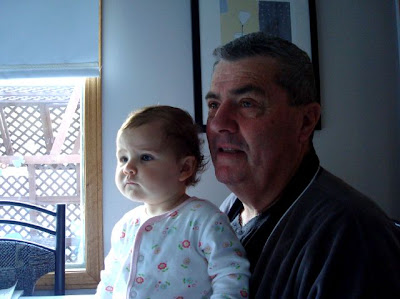 Copper’s short night soon caught up with her, and she started to wane a bit… 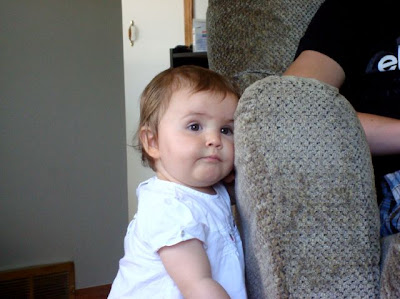 …until daddy put her down for a nap (and joined her, I believe, as his night was a bit on the short side, as well!) 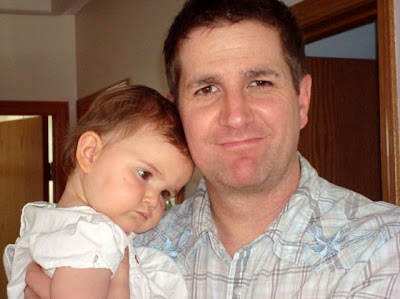 The second potential post was about our first-born, Adam, who turned 16 about two weeks ago. It hardly seems possible, considering how I am not much older than that myself! The post would have started with a really cute picture of him as a baby, grinning with his railroad engineer’s hat on and showing off those amazing dimples. Alas, the scanner wouldn’t work. Then I was going to show you a picture of him driving his new car. Alas again, since the examiner decided Adam could use a little more practice driving. So I will show you a picture of our handsome young man enjoying his birthday cake. 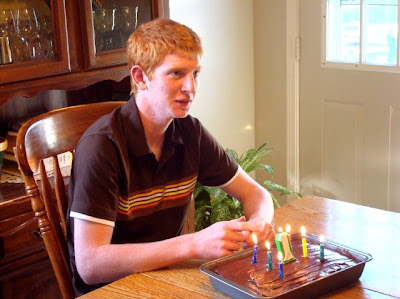 He doesn’t enjoy his brothers quite as much, but here they are, “my three sons”, 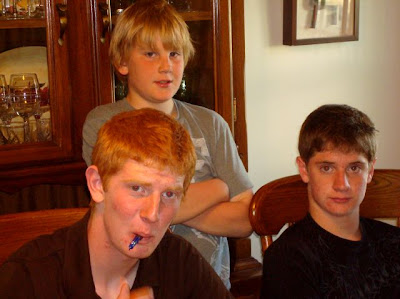 I’d still like to take a picture of Adam and his car, but since he did eventually get his license, we see very little of either one. He got a summer job at the local lumber yard, and so will hopefully be able to keep his car paid for and full of fuel!

The third potential post concerned Clem and the boys, who have been busy around the house and yard. We closed off the door in the kitchen, added a window on that wall, and replaced the existing window with garden doors. We also replaced our bedroom window. Then, to stop the cold Saskatchewan winter winds from stealing the heat in the house, Clem and his friend, Rob, along with help from Adam and Stephen, put new insulation on top of the old siding, covered the whole house with a weather wrap, and put on new siding. I was very impressed with the results!

Here’s the inside view, pre-drywall and -paint (because they haven’t happened yet, silly!) 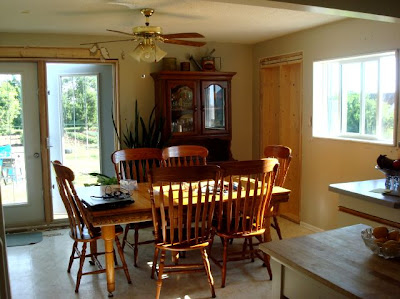 Derek took some pictures while work was being done outside. 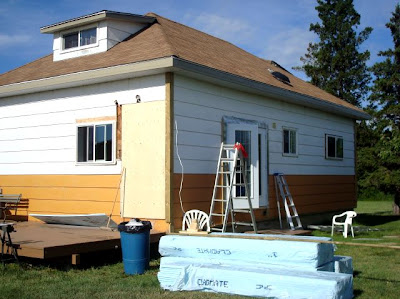 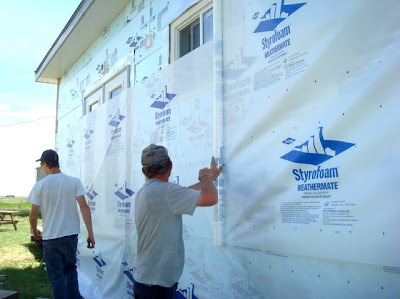 Stephen was lucky he didn’t lose his pants! 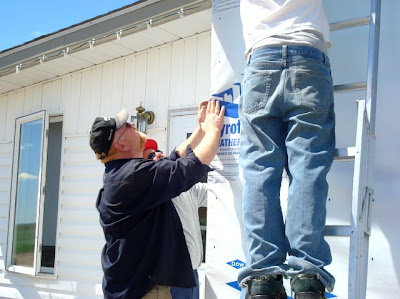 Stephen was usually on the ladder, but we were all surprised to see Clem on one! 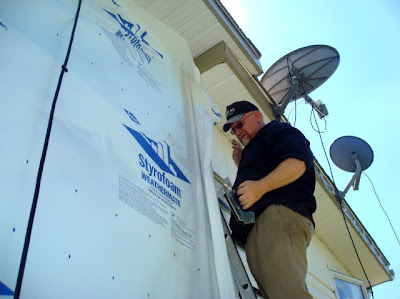 And finally, we were fortunate to have some friends from Scotland visit during their stay with their relatives and our neighbors, the Wrights. David and Lorraine were kind enough to host Lisa and me when we were in Scotland last summer, and it was so good to see them again. 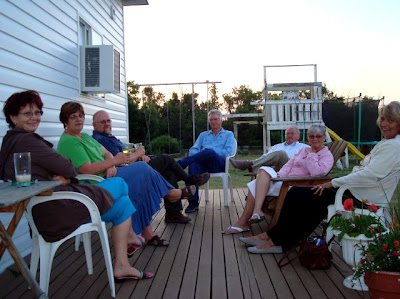 From left to right: Lynn, me, Clem (who even entertained a bit with the guitar!), Lyle, David, Carol, and Lorraine.

Here’s Derek teaching Lorraine how to use her camera. 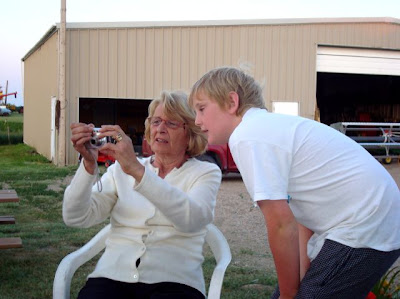 So here we are, pretty much caught up, I think. The boys all had good reports cards. Stephen pulled up his socks and brought his average up ten points to 90%. He’s deservedly proud of himself. Derek’s average was about the same, and has been throughout the year. Adam passed – enough said.

The weather has been grand – lots of sunshine, and even lots of rain. Last Monday we had an inch in about 10 minutes, and then we had another inch (or maybe more – still guessing without a rain gauge!) on Sunday evening. 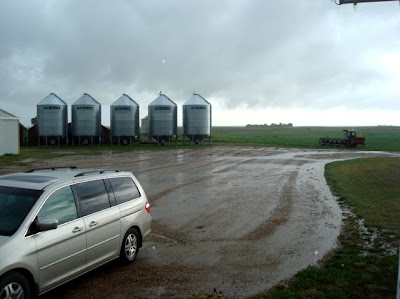 The crops look fabulous, and Clem’s itching to spend some more money on machinery. But first things first – a deck to go with the new garden doors, and new steps in the front, necessitated when Stephen tried to replace some rotten boards and things got carried away – literally.

Anyway, life continues at the Schraefel ranch. Next time, I hope to include some pictures of the finished outside of the house, as well as Derek’s first plane ride when he and Mom and I go to Thunder Bay next week.

Talk to you soon, and thanks for checking in!
Chandra