It’s been exactly one month since my last post.   There were some amazing posts written (in my head) since then.  Alas, I didn’t go to the computer and actually record any of them.  So, we’ll see what I can remember and do a little point form post.  And add some pictures, just for fun! 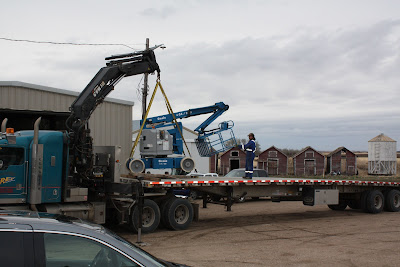 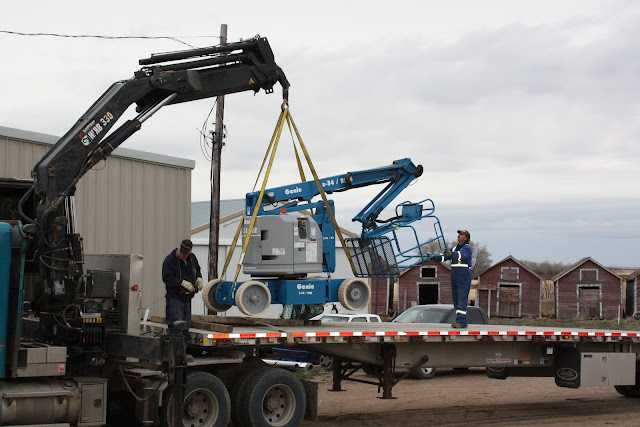 2.  We’ve had quite a bit of rain this spring.  I think even this duck was looking for higher ground. 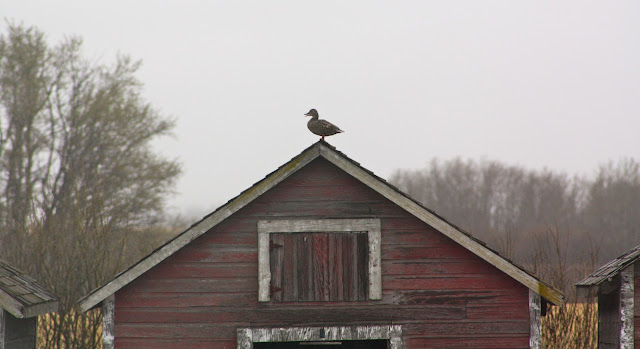 It made for some pretty beautiful skies, though. 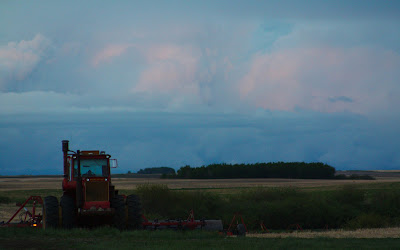 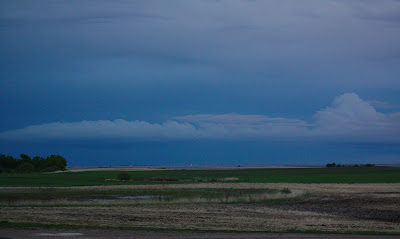 It also halted the seeding a couple of times.  We are in between rains right now, and Clem worked late one night to finish seeding the legumes (peas and lentils) before the last rains hit.   So with just the wheat and barley left to go in the ground, we are about half done.  It’s late, but not too late yet.  Oh, and my garden is in, as well.  Thanks to two great friends, it was done in about two hours, also just before the rain.  I haven’t put any bedding plants out yet, as it is still getting very cold at night and threatening frost.  Next week, I hope.  For now, they are living in a wagon pulled by a quad so we can put them in the garage at night!

3.  On the first really nice day we had, I opened all the windows in the house and hung some clothes out on the line.  Then Clem decided to burn off the dugout.  Figures. 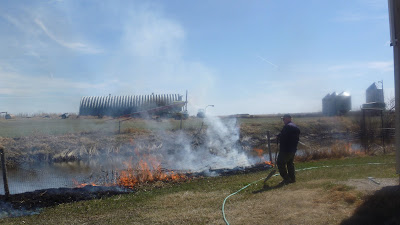 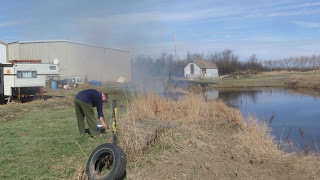 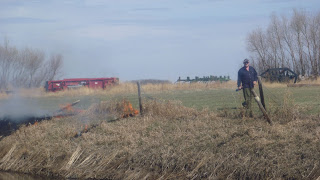 Roxy didn’t seem to be to worried about the fire and smoke. 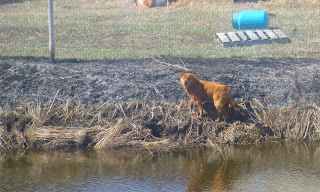 I took the opportunity to snap a few photos around the yard.  Fun. 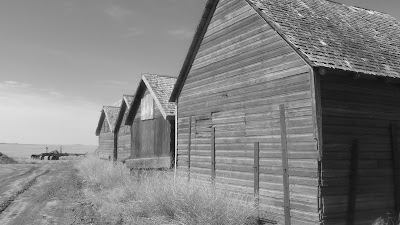 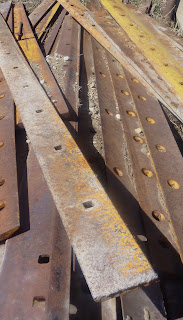 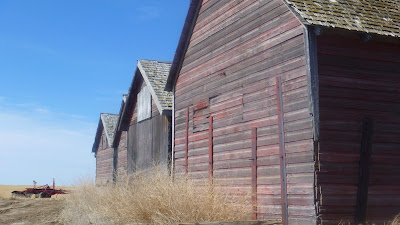 And the old dugout looked pretty good when it was all done. 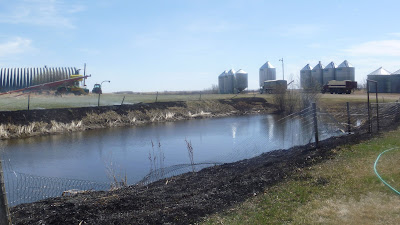 4.  Adam has been coming out to help seed when he’s not working his normal job.  Sure is good to have someone who can just jump in the tractor and do what needs doing.  It’s also nice to have him around again – I love having my boys here for meals.
5.  Stephen is recuperating nicely from his surgery.  At least that’s what I’m assuming.  I hear he goes to the gym, bikes to the dam, and went camping on the long weekend.  Not that I would hear any of that from him!
6.  Derek is spending some quality tractor time this spring, too, doing some of the pre-working and rolling the legumes.  His dad says he’s a pretty good operator.  Of course, he would much rather be in town with his buddies.  He is under some sort of illusion that his brothers spent all their non-school time in town, and so assumes that he should get to do the same.  It’s very difficult living with a thirteen-year-old who thinks he’s eighteen.  I’m thinking I may have to beef up my wine supply for the next few years.

7.  I attended the blessing of our new diocesan cathedral in Saskatoon.  What an amazing event!  And a once-in-a-lifetime one, as well!  The cathedral, which is decorated in a very simple and minimalist manner except for the stunning modern stained glass windows, was packed, right into the overflow area.  I believe it sits 1200, with seating for 500 more in the overflow.  There were six bishops in attendance, and all of the priests from the diocese.  The singing was beautiful, and the blessing rituals involved all of the senses – the light streaming in from the windows, the bitter smell of the incense and the sweet scent of the special blessing oil, the chanting – an incredibly moving experience.  So glad I went.  Since I had an appointment the next day, I treated myself to a hotel room and a bit of shopping.  my boys texted me with Mother’s Day greetings (a sign of the times), and Clem swears he didn’t have to prompt them.  All in all, a very nice couple of days.

So that’s about it for what’s new.  Thanks for stopping by!
Chandra