Derek joined a junior football program in a town north of here.  It’s only twice a week for six weeks, and he is having a ball.  He LOVES it.  “I love it more than hockey” were his exact words,  cutting me to the heart.  Football over hockey??  Must be a guy thing.
Today they played their first games.  It’s a non-competitive program, but that doesn’t seem to matter much to him.  He’s just happy trying to make the other team cry.  Seriously.  That’s one of his goals.  Again, a guy thing.

Clem says he looked pretty good out there.  He played center on the offensive line, snapping the ball, and was the kicker.  He also played on the defensive line.  He was a tired boy by the end of game two! 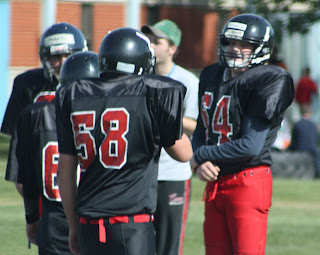 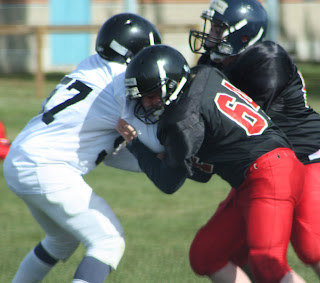 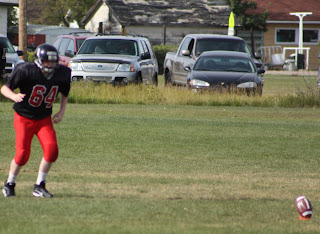 Mowing over his cousin!  (This is his favorite picture!) 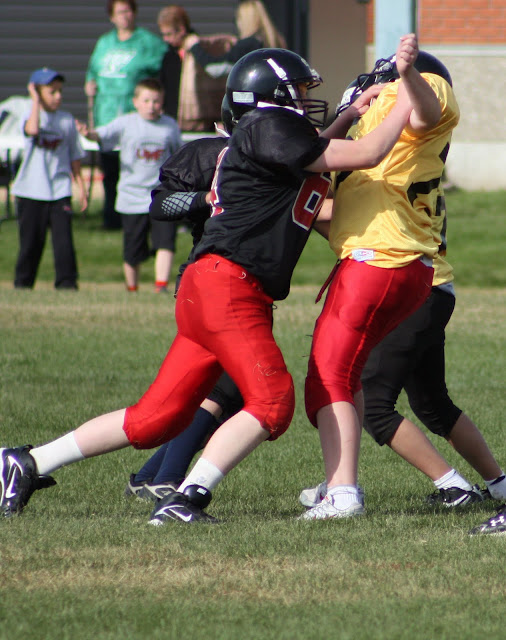 Stepping over his cousin. 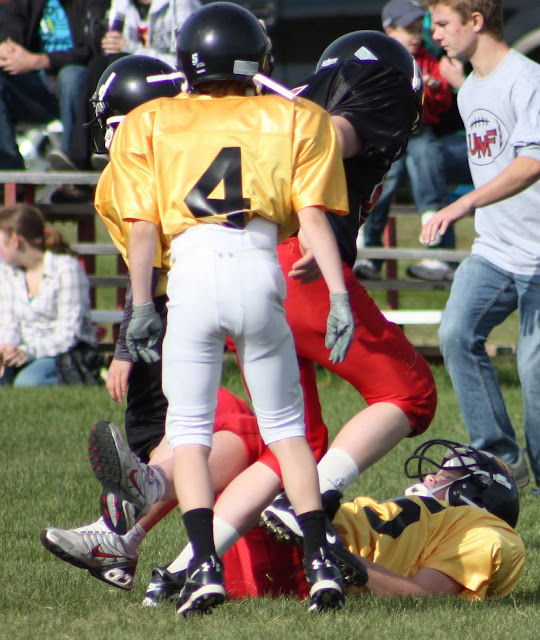 Moving them out of the way. 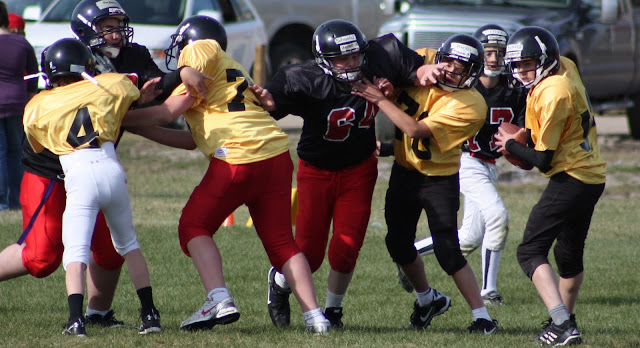 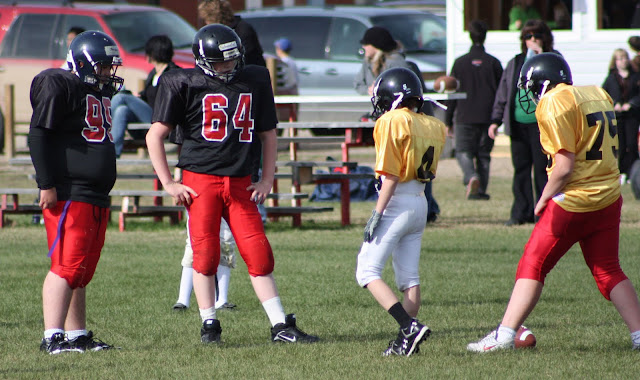 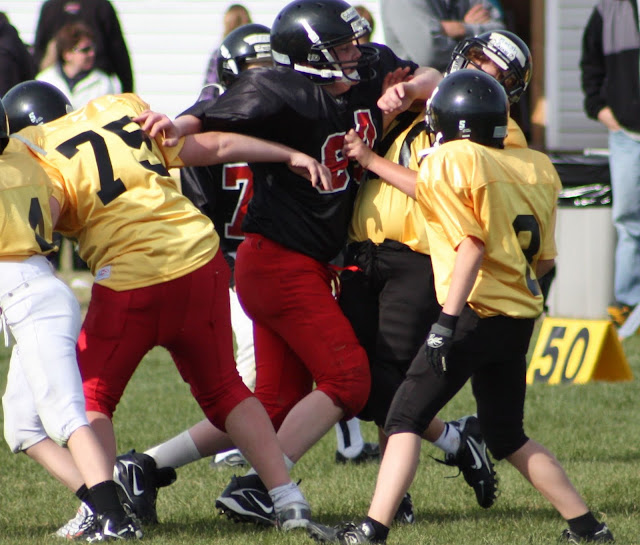 He’s a little bigger than some of his teammates! 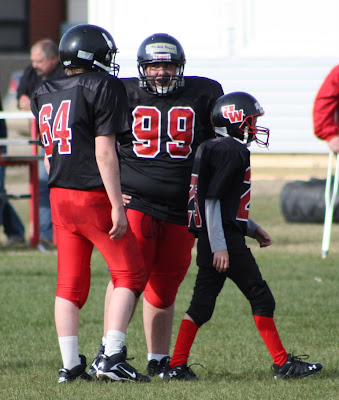 And he looks mean! 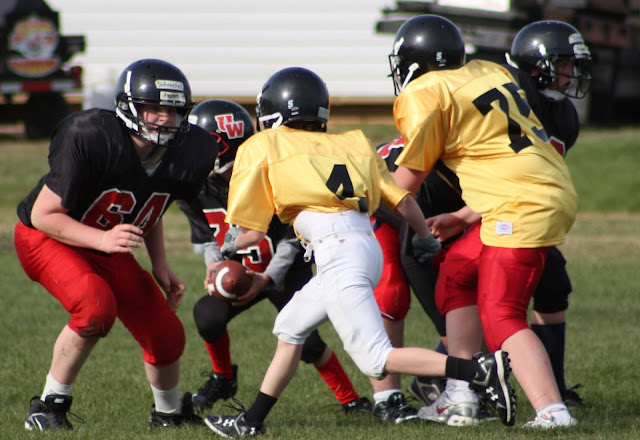 He says he caught this guy.  Actually, Clem said he would kick the ball and then run and take out the punt-return guy.  He is really into it! 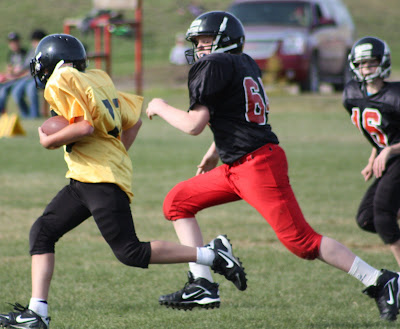 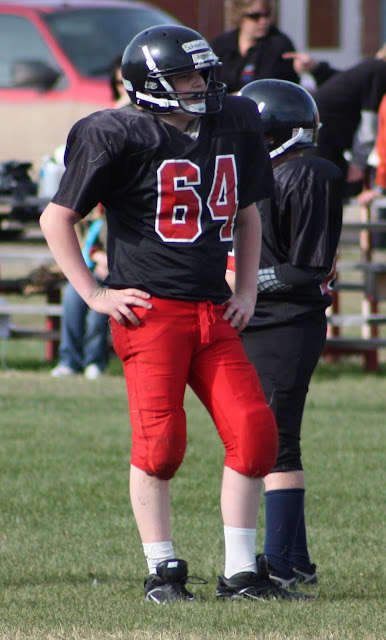 No pictures from the Rebel game against arch-rival Plenty yesterday.  The Rebels lost 30 – 17 or something like that.  The coach couldn’t seem to figure out how to stop the two guys who always had the ball.   Stephen got some good tackles, though.  One of the only guys who could catch their quarterback, who Stephen knows from hockey.  Poor kid – Stephen hit him so hard he was puking on the field!
It would have been nice for the Rebels to win on Stephen’s birthday, but it wasn’t meant to be.  Didn’t seem to put much of a damper on his celebrating though, as he only arrived home late this afternoon to get in an hour or so of bin-cleaning!
And cleaning bins is about all we’re doing, since it froze HARD two nights in a row.  We are so lucky to have the peas safe and sound in bins, but the lentils, wheat, barley, and flax have likely dropped a grade or two!  And more rain is forecast, starting tomorrow.  Here’s hoping October will be a warm, dry month!
Thanks for checking in!
Chandra

2 thoughts on “Oh great, we have another football player in the family!”