I arrived back in Calgary on Tuesday, anxious to see Clem and the boys. Lisa and I had a terrific holiday, but I did get a bit homesick! I’ll have to wait a while to see Stephen – he is at Notre Dame hockey camp until Saturday, and will stay with my cousin, Bonnie, and her daughter, Kaycee, for a week until they come for our Veness reunion on the 28th of July. Saves us some driving!

Clem and Derek met me at the airport, and we stayed at a hotel for the night. We went for supper with Jay, Terri, Rob and Amber, and had a great visit. Jason and Terri are busily preparing for the arrival of my niece in a few days. I can hardly wait to see her in the Campbell tartan dress Lisa and I got for her!!

So, back to the Scotland part of the blog. I flew out of Calgary on July 4th. It was my first time overseas, and it felt strange to be in a different country half way around the world. The info screen on the plane said it is 4500 miles from Calgary to Glasgow. Lisa got to Glasgow the night before, and stayed in a hotel at the airport. She met my 6:30 a.m. plane, and I freshened up and we had breakfast before our host picked us up. Lorraine Wilson is a cousin to Lyle Wright, our neighbor, and I had met her once before. When she heard we were visiting Scotland, she kindly invited us to stay with her and her husband, David. I can honestly say I have never been treated so well as a guest ever in my life. She had gifts for US!

This is their comfortable home in Port Glasgow, which is just outside of Glasgow itself.

And here’s Lisa snapping a shot of the amazing view from their living room (or lounge, as they say in Scotland).

It truly is an amazing view of the port and the River Clyde. David said on a clear day, you can see Ben Lomond (that’s what they call a hill, this one being near Loch Lomond). Unfortunately, we didn’t have a clear day while we were there, but it was still an incredible view! My camera doesn’t do it justice.

On our first day in Scotland, Lorraine drove us to a lovely little village called Kippen and we had a wonderful fish and chips lunch at the inn. This is Lorraine and myself just outside the inn. 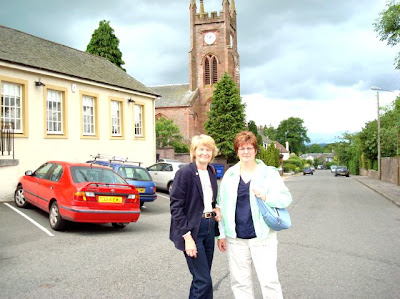 Lisa really enjoyed the lunch on the patio. 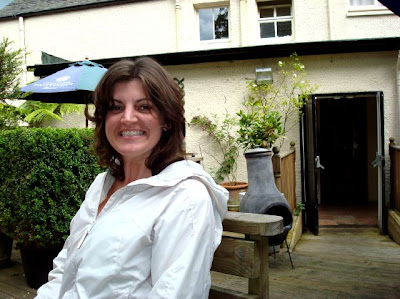 Then we headed to Falkirk to see the Falkirk Wheel, one of many centennial projects in Scotland. This one was designed to lift boats instead of locks on a canal. It is massive.

This is the “resting” position. A boat enters the circle on the bottom, and the huge arms rotate until the circles have switched position. Then the boat can continue down the upper canal. The platforms in each circle hold water, so the weight is evenly distributed.

It was a very interesting afternoon. It took us a while to actually find the wheel in Falkirk, which sounds strange because it is so big, but the signs aren’t very good in Scotland. I guess they figure you get to see more of their lovely country while you are trying to become unlost!

On the way back to Lorraine’s, we drove by Stirling castle, home of Robert the Bruce, I believe. At least it is near Bannockburn, where Bruce defeated the English. 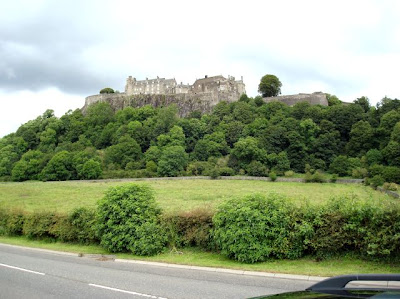 We had an early evening – in fact, I was in bed by 7 pm, having been awake for some 36 hours or so. However, I awoke very refreshed, and we headed off to Loch Lomond and other various places. David joined us, and we had a great day. We stopped first at Luss, a picturesque little village on Loch Lomond. Beautifully kept wee cottages line the narrow cobblestone streets, and many have wonderful gardens. Check out these lilies.

Here is a view of Loch Lomond, with Ben Lomond in the distance.

I think David said the hills in the distance in this photo are the ones we saw from his lounge.

David and Lorraine treated us to a wonderful seafood meal at an oyster bar at Loch Fyne, a seawater lake. All the seafood is caught right there, and it was awesome. I tried oysters for the first time. They were OK, but the mussels and scallops were incredible.

The views were incredible on our drive, and we stopped to snap a few photos.

Then it was off to Inverary Castle, home of the Duke of Argyll, and traditional home of the Campbell clan. It was built on the shores of Loch Fyne sometime at the end of the 15th century.
David tricked us and paid our way in – the Duke has to maintain his home somehow, doesn’t he?

We were a little miffed that the Duke didn’t greet his Canadian cousins, but we enjoyed seeing the castle anyway. We weren’t supposed to take pictures, but I snuck a couple!
The tapestry drawing room:

The china turret – an circular room off the dining room to hold all the china!

The gardens were amazing, but weren’t open to the public. This was taken from a bedroom window.

We walked around the town of Inverary a bit. Here’s David and Lorraine in front of the George, a nice little inn and pub.
At one time there was a separate drinking area for the men – no women allowed.

The bell tower – it closed about 15 minutes before we got there. Too bad – it would have been a lovely view from the top.
There is so much vegetation, most of it unknown to me. This plant is called gunera, I think, and it is most unusual. It looks like rhubarb on steroids.

I can’t remember whose monument this is, but the view was nice.

We took a ferry back to Port Glasgow. More beautiful scenery, even in the rain.

Lorraine had prepared lots of wonderful food for our evening meal – or tea – but David wanted to go for a drink at the clubhouse first. Lisa and I went with him. Newly elected councilman David held court with his two female Canadian friends, and we met many golfers as they entered the 19th hole. One congratulated us on our President’s birthday, but he was an exception to the interesting and friendly people that we met. David insisted that Lisa drive home, but I didn’t record that on camera. My eyes were closed!

Stay tuned for the next chapter of my exciting holiday saga!
Chandra