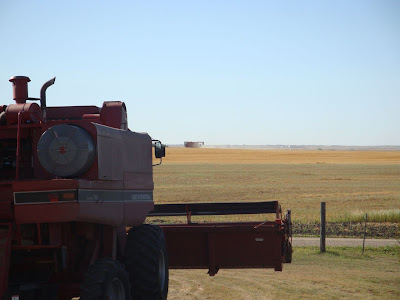 Here it is, nearly a month since my last post.  How do you people put up with me???  I did find a leftover photo from harvest, though.  Thought I’d throw it in because I got a comment on my harvest post from someone in Sweden!  Who’d have thought??

It’s been a little crazy around here again.  Shortly after I wrote that last post, I received a phone call saying Derek was being taken to the local hospital by ambulance.  Let me tell you, that is one phone call you don’t ever want to get.  It turns out he hit his head again somehow (he doesn’t remember what happened – he’s lost about three hours of that day), blacked out, and when he came to he ran away from the school.  A wonderful lady (or should I say “angel”) found him laying on someone’s lawn, and called 911.  When I got to the hospital, he was still very confused and scared, and didn’t know where he was or why.  They kept him overnight for observation, but he was coming around to his old self a couple of hours later.  When the nurse asked him if he was allergic to any medications, his reply was that he hadn’t tried them all yet!  That’s my boy!  He seemed quite a bit better the next morning, although he still had a pretty good headache.  He took it easy for a couple of days, but the headache got worse and the vomiting started again, so we were off to the city for a CT scan. (This Thanksgiving I gave special thanks for our health care system!)  They didn’t find anything abnormal on the scan, so he is either suffering the effects of the concussion, or he has a flu, or both.   He hasn’t had a headache for about 10 days now, and his eyes look normal again.  All you mothers out there will know what I mean by that.  So if he stays symptom-free for another week or so, he can try skating again.  His team has started without him, and he will have some catching up to do.

Derek came to Weyburn with us to celebrate my dad’s cousin’s 50th anniversary, and to visit lots of relatives.  We even came across some cousins we had never met before!  And I must say I’m very glad we met, since they are super people and I plan on getting together again sometime.  All of the out-of-town guests stayed at the same hotel, so we had lots of time to visit and laugh.  Dad’s nephew lives in Weyburn, as well, and they graciously hosted the crew a couple of times during our stay.  All and all, it was a great weekend.  Here are a few photos.  The first is Dad with his two sisters and their cousin, Oliver. 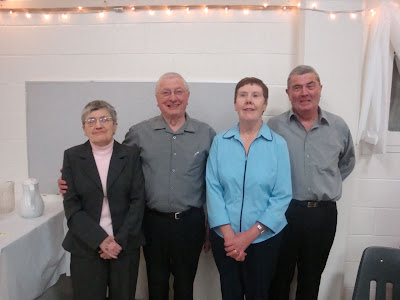 This is Oliver and his sister, Dolores. 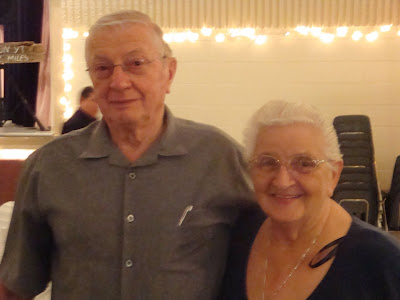 Then we have Oliver and his two daughters, Cheryl and Susan.  These are the cousins I had never met before, and let me tell you, they are a lot of fun!  I predict more family gatherings in the future! 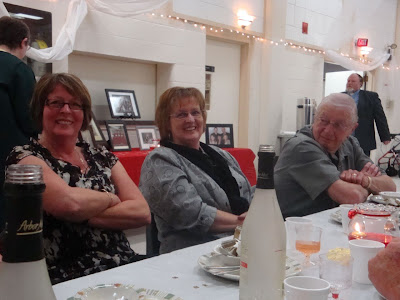 Here is Dolores with two of her daughters, Shelley and Cindy, more “new” cousins for the tree!  Shelley’s grandson is the same age as Derek, and lives in Kindersley.  He and Derek know each other from hockey – small world! 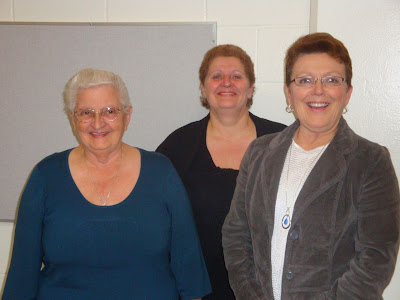 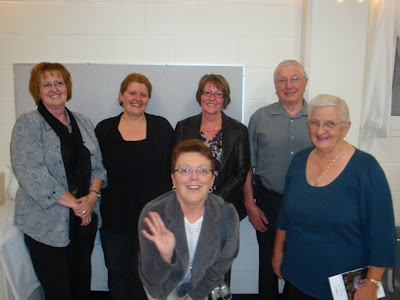 This is my cousin, Mike, and his wife, Korryn, who live in Weyburn and let us invade their home.  They are good sports!  You’ll also note Derek  in the background, on his phone, as usual! 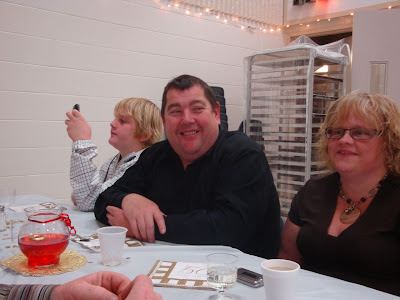 Here are a few shots from the more casual gathering at the hotel. 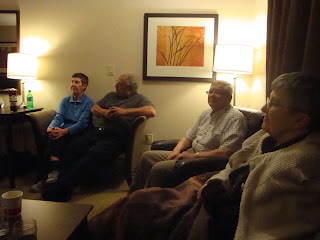 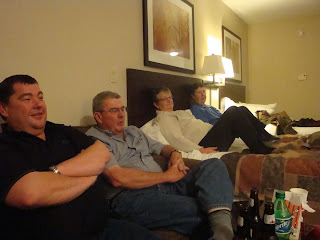 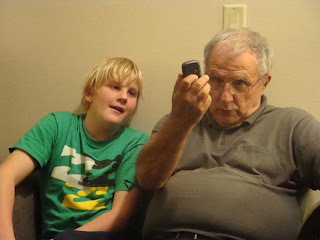 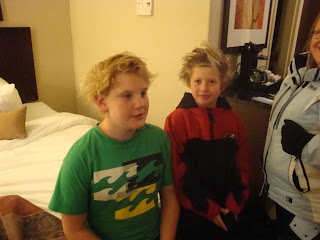 And now I can’t get the text to align to the left again!   Adam and Stephen are still playing football; their first play-off game is on Saturday versus Central Butte.  Their hockey has also started, although many of the players are hurting from football.  Could be an  interesting couple of games to start with.
Clem has been busy winterizing the machinery and yard.  He is also cleaning wheat while the weather holds.   Then it will be hockey, hockey, hockey, I guess.  The cold room is full of potatoes, carrots, and onions, and the freezer is full of peas, beans, corn, tomatoes, zucchini, and beets.  My cousin got a couple of moose that had been frequenting our yard, so I will have a couple of moose roasts to add to the inventory, as well.
All in all, a good year!
Thanks for stopping by!
Chandra