Or Toronto, as some people call it!   Clem received a call a few weeks ago about a retirement party in Toronto for a fellow he used to work with at CP, so we took advantage of that opportunity and turned it into a four-day get-away.  It was great!  Well, the 30 mile drive on glare ice on the way to the airport and the fire alarm that woke us in our 19th floor hotel room weren’t great,  but the rest certainly was!

Clem took his first plane ride in 12 years, and I must say he handled it very well, considering he said 12 years ago that he would never get on another plane.  Actually, he said it was way easier to take than the cab ride from Pearson airport to the pub where the retirement party was being held!

Clem and another friend, Dave, surprised Vince at his retirement party, and I must say the look on Vince’s face was worth the air fare to get there.  It was a great evening of reminiscing and catching up, and we were so glad we went.  Clem, Dave, and Vince were the three managers of Work Equipment for CP in Canada from 1993-1996, and they were apparently quite the characters.  Clem has seen Dave since then, but not Vince, so the three of them had great visits over the weekend.  Here they are at lunch the next day. 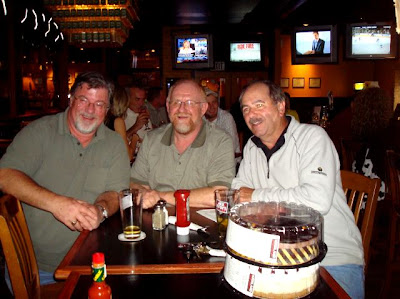 We took in the fantastic Hockey Hall of Fame, but only for an hour, so I’m sure we missed some things.  But as Clem says, there are only so many ways to display sticks, sweaters, and skates.  He also thought it looked a little like our porch, only without the smell.  This wall of pucks is the first thing you see when you arrive. 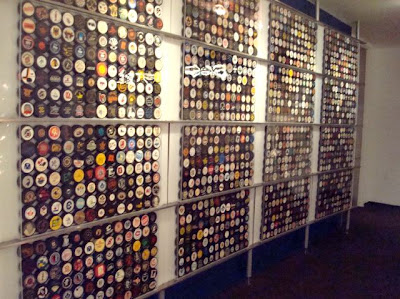 Then it’s on to the great ones, like Gordie Howe… 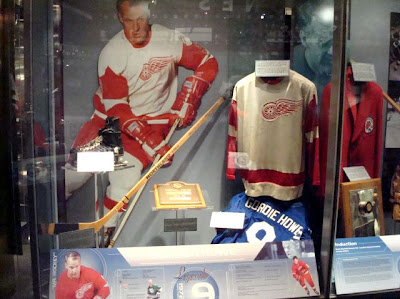 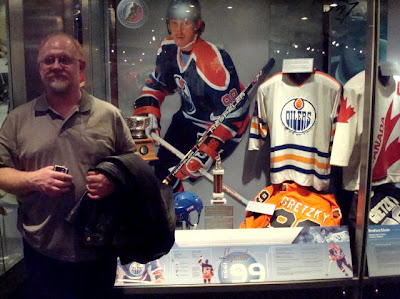 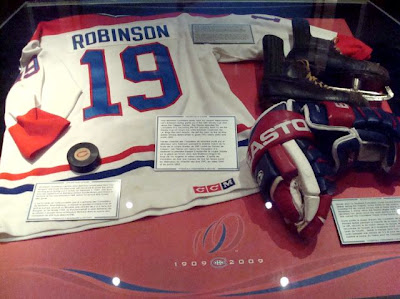 We were a bit disappointed by the display around the 1972 Canada-Russia series, but they did have Paul Henderson’s jersey. 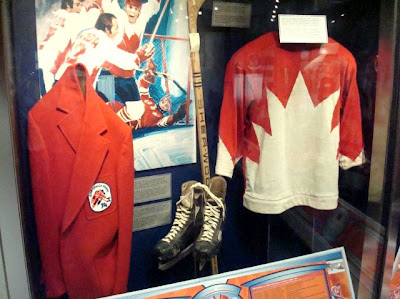 And it is really a thrill to see Lord Stanley’s cup in all it’s glory. 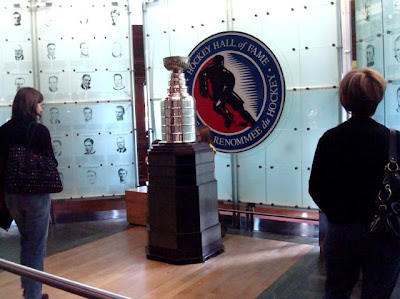 Here’s the puck used in the 1901 championship game where Winnipeg defeated Montreal. 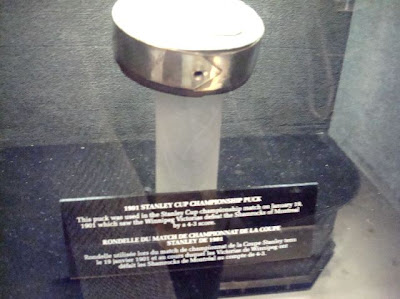 I loved the sculpture outside the entrance, which really captures the spirit of hockey. 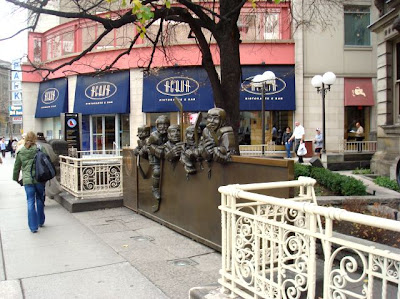 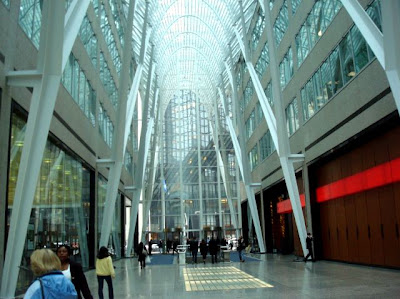 This last little bit of information we learned from Clem’s cousin, Cliff, who invited us and Clem’s nephew, Brendan, for a truly exceptional fine dining experience.  Cliff is the director of business operations for a group of restaurants in the Toronto area, as well as part owner of four of them.  We met for drinks at Canoe, a pricey place frequented by corporate types, on the 54th floor of the TD tower.  We had an incredible night view of downtown Toronto, including of course the CN tower, which was all lit up with changing colors.  Cliff gave us a tour of the kitchen and the chef treated us to a sample of some of their wonderful appetizers.  We then walked over to Jump, a trendier and popular bar and restaurant, and took a quick tour.  Then it was off to Biff’s for dinner of French cuisine.  Great food, great wine, and great company.  It was truly a night to remember. 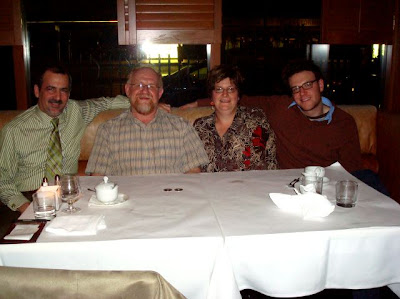 We got to see Brendan again before we left on Sunday.  He and his girlfriend, Kristy, invited us for brunch with Brendan’s dad, Cam and Gail.  I had never met Cam, and Clem hadn’t seen him since about 1981, so we had a wonderful visit catching up and learning about each others’ lives. 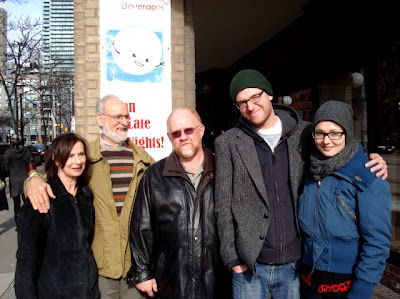 Another highlight of the trip was a bus tour to Niagara Falls.  It really is a must-see place.  Even though the weather was dreadful – raining, windy, foggy – we had a very enjoyable day. 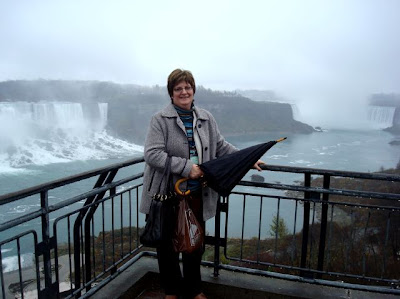 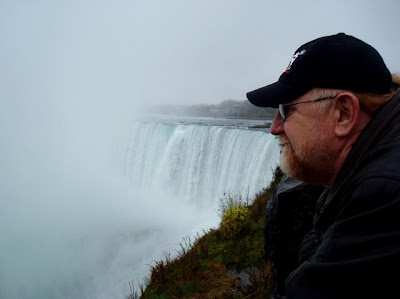 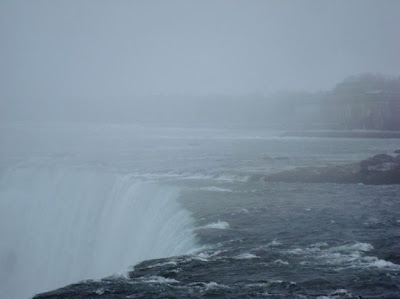 These are the American falls. 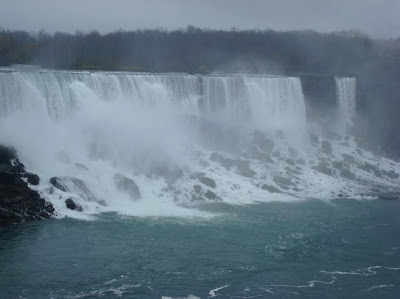 This is the power generating station, a massive structure on the Niagara River.  Cars drive on the top of it. 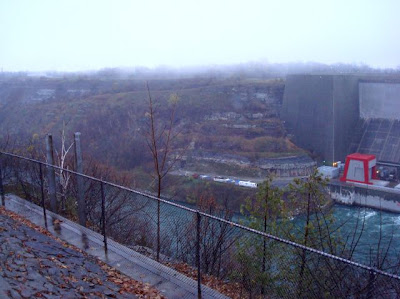 There is a whirlpool down the river from the falls.  Some foolish people chose to take a ride over it – but not us! 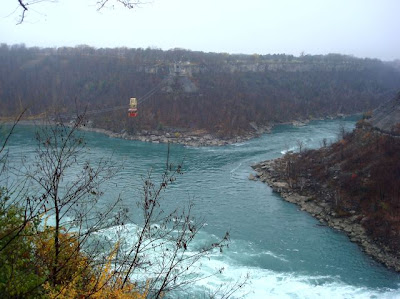 Aren’t we fashionable!  We met a very nice Belgian fellow on the tour, and he agreed to take our picture. 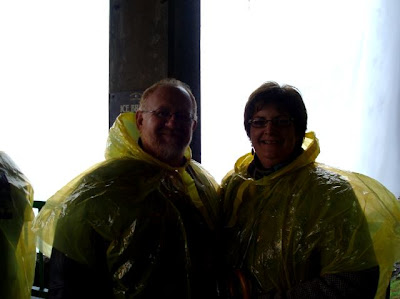 Back in Toronto, we stopped in at St. Michael’s Cathedral, situated close to our hotel, and it is an impressive building. 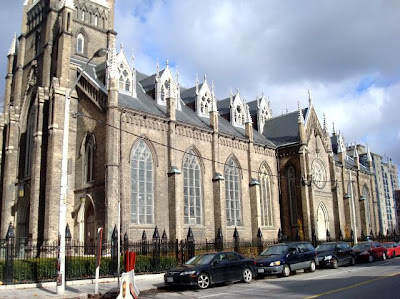 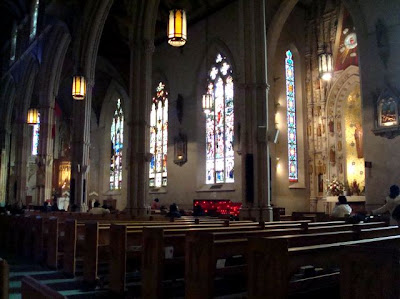 3 thoughts on “Return from the Center of the Universe”