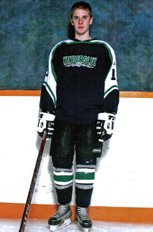 Stephen plays with the Kindersley “AA” Bantam Klippers this year. He is a first year Bantam. They had a pretty successful year. They finished 3rd in their league but went down in the semi finals against Prince Albert. They have all been exciting games to watch. Stephen plays defense and plays a physical game. He seems to play best when his team is down a few goals. He is 6′ tall.

Stephen & Chandra are in North Battleford this weekend for a tournament, where they have lost their first 2 games but won the third. They have 1 game today and will be home today to watch our Pee Wees who have advanced to the Northern provincial final against Hudson Bay. Adam is done his season and Derek has his final championship game to play on Monday.